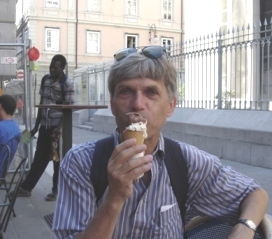 Bernard de Wit studied theoretical physics at Utrecht University, where he got his PhD under the supervision of Nobel Prize laureate Martinus Veltman in 1973. After postdoc stints in Stony Brook, Utrecht and Leiden, he became a staff member at the National Institute for Nuclear and High Energy Physics (NIKHEF) in 1978, where became head of the theory group in 1981. In 1984 he became a professor of theoretical physics at Utrecht University where he has stayed for the rest of his career. During the years, de Wit spent several periods at CERN as a visiting scientist in the Theory Division. He officially retired in 2010 but continues to engage in research.

Professor Bernard visited the Physics Department of the University of Concepción during the second semester of 2019, the visit was organized by Dr. Julio Oliva. During his stay, he taught the course Quantum Field Theory II, which is a graduate course. However, as this was a special occasion, some undergraduate students were allowed to attend these masterclasses.